“How walls of moss could help reduce urban air pollution”

Do you want to know “where the magic happens”?

Follow Spencer Kelly from “BBC Click” and their “Green Special” to find out “How walls of moss could help reduce urban air pollution”!
But be careful, because “if you live in the green, it’s easy to forget what life is like in the gray”: According to the World Health Organization (WHO), air pollution “kills an estimated 7 million people worldwide every year”.
As Spencer Kelly said, “we’re not all going to move back to nature”.
“𝘽𝙪𝙩 𝙬𝙝𝙖𝙩 𝙞𝙛 𝙬𝙚 𝙘𝙤𝙪𝙡𝙙 𝙗𝙧𝙞𝙣𝙜 𝙣𝙖𝙩𝙪𝙧𝙚 𝙞𝙣𝙩𝙤 𝙩𝙝𝙚 𝙘𝙞𝙩𝙞𝙚𝙨”?
Therefore, BBC News visited us in Bestensee near Berlin – and of course our magical moss farm. Here, we at Green City Solutions “have been growing moss up to 15 times faster than in nature”.
Spencer Kelly has “to say there’s something very soothing about being in their greenhouse”.
Thus, he asked Ingrida Melková, our Moss Researcher & Cultivation Specialist: “Do you just come in here and stroke the moss?” …and followed her into the moss lab – because “it’s in the lab where we’ll get to see moss’s superpower”.

Follow the link in the picture to watch the complete clip. 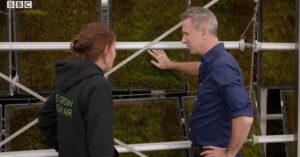